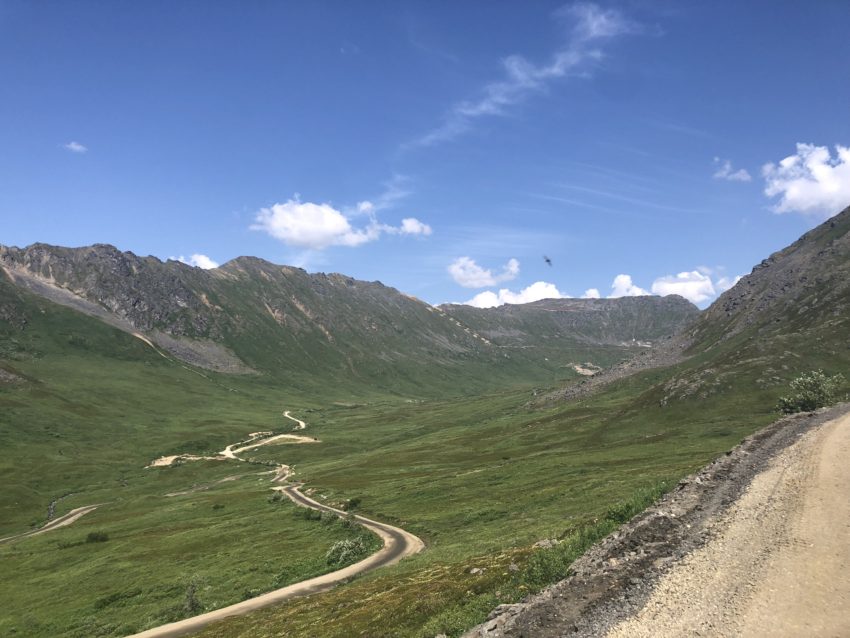 The first time I’d heard of the Hatcher Pass Marathon it was because a friend, Jennifer Hatcher, had signed up for it as her Alaska marathon, because—well, because it had Hatcher in the name. For my fourth marathon in Alaska I wanted to try another venue. After having been to Anchorage, Juneau, and Fairbanks I wanted to try something more rural.

Longtime Alaskans, known as sourdoughs, will tell you that real Alaska begins about 50 minutes outside of Anchorage. Anchorage could be confused with Peoria, Omaha, or Toledo in terms of being a generic nondescript small city. The city is pleasant enough, but lacking in real distinction except perhaps extended daylight hours with strip malls, office parks, and the ubiquitous coffee kiosks. This race, which is about a 90 minute drive from Ted Stevens Anchorage International Airport (aside: nothing like evoking the name of a guy who died in a plane crash in your airport’s name, eh?) proves that statement out.

The Hatcher Pass Marathon is a low key point-to-point race offering a marathon as well as a 3-leg relay beginning on a remote road in Willow, about an hour and a half outside of Anchorage. This year in particular faced unseasonably warm weather (high in the 90s) and a certain amount of haziness due to wildfires in the region that only bothered my pictures. The race is 10 kilometers on asphalt road with a reasonably steep climb. I was a bit concerned that this race would not be as scenic as I had been lead to believe based upon these first miles. The road itself is exceptionally dull punctuated only occasionally by passing cars, the vast majority of which were support for participants. However, if you kept your head on a swivel you could still catch a few glimpses of that trademark Alaskan natural beauty. After the first 10 kilometers the course becomes a dirt road that opens up slightly and you can spy the Willow Creek, better. You might imagine bears hunting for fish in these waters, but these are not salmon streams, instead they are mostly snow meltwaters surrounded by campers and RVs as you enter a state recreation area. This portion of the course has the gentlest inclines until the last relay exchange at mile marker 17.

We interrupt this race report for a brief aside about insects in Alaska. Good weather in Alaska means mosquitoes, and black flies. For the last few weeks the exceptionally warm weather meant insect quantities the likes of which have not been seen since the Jews left Egypt. Mosquitoes are generally quite easily outrun, but the black flies, which I’ve also encountered in the backwoods of Maine, are not so easily avoided. I hate wearing bug spray. It makes my skin burn, and my lips go numb, and god knows what chemicals are getting into my mouth, but the swarm of black flies I had from miles 10-19 had me swinging my hat so wildly one of the passing cars took pity on me and offered me bug spray. I caved and bathed in the stuff rather than be carried off by the swarming pests.

We now return to you to your race report, already in progress…From miles 17 to 25 you climb relentlessly around switchbacks, and get spectacular views of the Talkeetna Mountains. Here it was hard not to be reminded of last year in Zermatt. The peaks in Switzerland are more jagged, but the feeling of your own smallness next to the immensity of the landscape is just as humbling. Finally after 25 miles of climb you reach the summit of the pass, and suddenly the bottom drops out. You try to keep yourself upright for the last mile and a half while you free-fall down to Independence Mine where the RD is waiting with your wood finisher medal. They also had a cookout, which amazed me given the current fire watch situation in the area that the park rangers permitted such a thing.

I should mention that the course is not certified, though for the life of me I can’t imagine why you would want to try to qualify for Boston here, and the course is recognized as slightly long (probably about 26.5) by even the RD, so this isn’t some “my GPS says” nonsense. Aid stations were fully stocked with soda, Gatorade, water, jelly beans, all sorts of goodies and most importantly friendly and encouraging volunteers. There were roving volunteers in trucks spraying people down and offering drinks, as well as community members cheering their runners and others alike.

The race organizers, Natalie and Eric, who refer to their company as Happy Malamute Running, after their two Malamutes, are (as you can imagine based on that detail) my kind of people. They are all about having fun in nature, and supporting every last participant. Due to the 90-plus degree heat there were a number of people struggling, but this RD and her volunteers were committed to ensuring everyone felt included and supported the whole way. That coupled with the beauty of the area, and the fact that I get to run down rather than up, means I will be coming back next month for the Archangel Marathon.

Fun Fact: In 1976, Alaskans voted to make Willow the state capital in order to improve access for Alaskans. Juneau, the capital then and now, is only accessible by boat or plane. However funds were not successfully appropriated in the 1982 election, so the state capital remains in Juneau.